in Photography Ideas
Reading Time: 4 mins read
A A

One of our most recognized photojournalists, Emilio Morenatti, has been awarded one of the Pulitzer prizes journalism, awarded by the prestigious Columbia University (New York); specifically, the so-called ‘Feature Photography‘, which rewards the best photojournalism work of the year and that the Spanish has taken “for a moving series of photographs that takes viewers into the lives of the elderly in Spain struggling during the COVID-19 pandemic.“

Photographs like the one you have seen on the cover and with which the photographer has illustrated the harshness of the situation experienced in Spain throughout the pandemic by the elderly. And that, despite the plastic, it is an image full of tenderness; but not all the images that make up the award-winning work have the same tenderness. Quite the contrary, they show images of morgues and corpses, and of course pictures of the loneliness that older people had to face.

Smartphone vs DSLR for photography, which bet is better if we have a € 500 budget_

Really happy to receive the Pulitzer Prize. Sharing here a selection with some of the best images. Activate 🔊 pic.twitter.com/wxrIdrCHP4

Without a doubt a great work that is now recognized with a prestigious award, endowed with an award of 15 thousand dollars, in which Spanish names have not abounded (Manu Brabo was until now almost the only reference). By the way, in case you don’t know him, Morenatti is a photojournalist with a long career in which he has been recognized with numerous awards such as US Photojournalist of the Year or Pictures of the Year International; He is currently chief photographer for the Associated Press agency for Spain and Portugal.

Of course, the Pulitzer Prizes also have another category of photography, called ‘Breaking News Photography‘and that is dedicated to current series made by a team of photographers. Well, this year the winning team is precisely that of the AP agency (to which Morenatti belongs) and it has achieved it thanks to its coverage, in several cities of the United States, of the response produced in that country by the death of George Floyd. 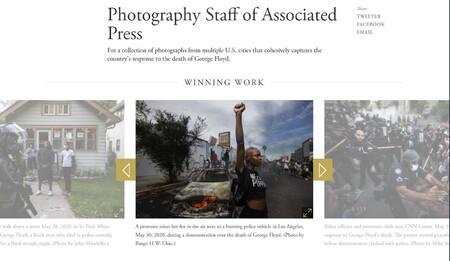 Screenshot from the 2021 Pulitzer Awards page.

Cover photo | Agustina Cañamero, 81, kisses and hugs her husband Pascual Pérez, 84, through plastic to avoid contagion of the coronavirus in a residence in Barcelona and after having been separated for 102 days. Spain, June 22, 2020 © AP Photo / Emilio Morenatti

'The City that finally sleeps', when New York City finally had no choice but to rest due to the COVID-19 pandemic

What is the warmest pair of gloves?

Can dash cam record when car is off?

Can you buy a Panavision lens?

Is a 32 inch computer monitor too big?