“The art of documentary photography”, by Javier Sánchez-Monge, a book to show how hard it is to be a photojournalist

in Photography Ideas
Reading Time: 13 mins read
A A

Photography books are of many types, from technical works to others that serve us to think like photographers and, in a way, “get under his skin.” For example, in the harsh reality of a photojournalist dedicated to documenting humanitarian or environmental causes like Javier Sánchez-Monge Escardó, author of the volume that we have reviewed on this occasion: “The Art of Documentary Photography. An odyssey between heaven and hell”. 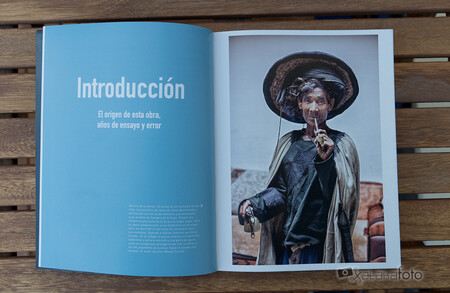 This photographer has a long history with many documentary projects that he has published in national and international media and that have earned him various awards; therefore, we are talking about a professional who is well prepared to write a book like this one, with a great deal of experience on the subject. All this enables him to tell, “without mincing words”, how tough this discipline is, just what he does with “The art of documentary photography.”

The volume belongs to the Anaya Photoclub collection, one of the most complete today in the field of photography in Spain, and consists of 216 pages divided into eight chapters which, in turn, we can clearly separate into two parts according to its content. The first would include the introduction plus the first three chapters, and in it the author reels off a kind of manual (very personal, yes) on how to engage in documentary photography. 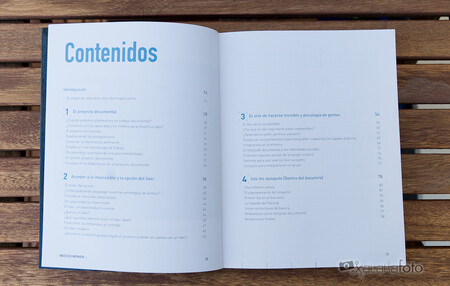 The second part would be the last five chapters where the photographer is dedicated to talking about his most important documentary projects; a more extensive part and where, although it is not specially designed to give advice, there are also a significant number of ideas for those who want to dedicate themselves to this profession. In fact, this second part seems much more interesting to us (although we do not anticipate events).

Regarding the format, it is a book with a medium size, with the pages in vertical orientation. A way of presenting oneself that, although common, does not initially seem the most appropriate for a photography book; However, on this occasion (more than on many others) it is very appropriate since, although it is still a book where the image is fundamental, contains abundant text and in this way it is better read. 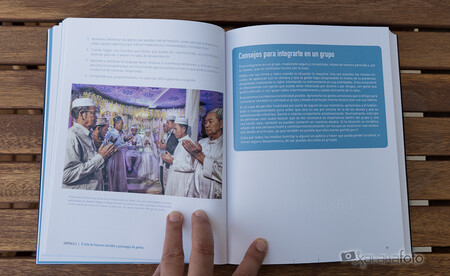 On the right page one of the few supporting tables that the book has.

The truth is that it also has a good number of photographs, but these occupy a single page at most; A double page could well have been made with some of them, but the truth is that the chosen design is adequate.

There are also some supporting charts with prominent information, but they are quite scarce. For the rest, the biggest drawback we can put on the formal part is that there are some pages without a single image illustrative, something that is not well understood for a book by a photographer (however important the text is). 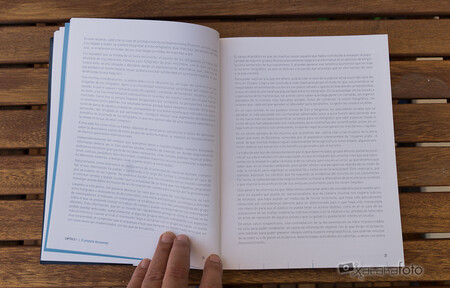 There are several pages, especially at the beginning, where there is only text, which is a bit bleak for a photography book.

On the contrary, there is some double page in which there are almost only photos, and although this is already more logical, the result is that the design does not seem as successful as it could have been, at least in the first part. In the second, the truth is that the illustrations seem better distributed and, very important, almost whenever a photograph is mentioned in the text we have it next to (or very close), to be able to see what we are told. 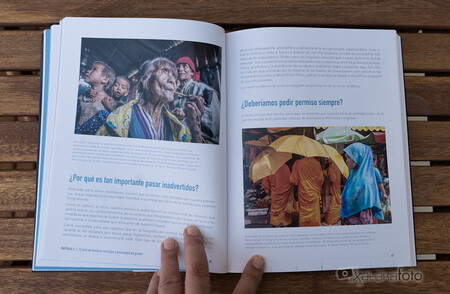 And yet in others there is hardly any text.

As we said at the beginning, “The art of documentary photography” it is certainly not a technique book or anything like that. Rather, it follows the path of classic volumes of the genre like these, or others like ¡Ayúdame a mira! The bible of the graphic report by Tino Soriano that we reviewed last year. 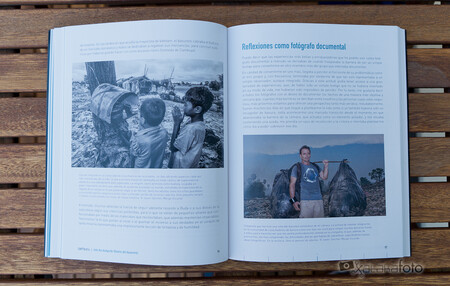 On several occasions we see photos (like the one on the right) where the author himself is portrayed during the making of the documentary reports that he talks about.

Even the author tells it in the interesting introduction: “This book of documentary photography does not arise from the learning of any school, but is the exclusive result of experience. If what you expect are academic rules, you are going to be disappointed; here everything is practical and there are no academic rules. Here I will be able to explain to you how to hire a fixer, how to move around in a refugee camp, how to try to remain unnoticed […] but never anything that you have been able to learn in a classroom“.

As he also comments, the book is directed both professional photographer you want “incorporate new experiences” as the initiate “you just finished your photography studies and don’t know where to start“. We totally agree, it is a book aimed especially at those who are thinking of dedicating themselves to photojournalism, although occasionally also for those interested in any of the topics it talks about … But, yes, it is not suitable for all audiences . 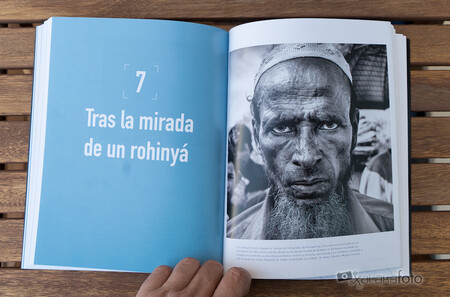 The second part includes chapters devoted entirely to a specific topic that are hard but very interesting.

Of course, while (it is assumed) the first part would contain the most information, in the form of advice on how to engage in documentary photography, it seems to us that the second part is much more interesting. This is because the first is somewhat thick; It is clear that the author speaks from deep knowledge, and tells things as they are, but it seems to us that someone without experience, who tried to put himself in the shoes of a photojournalist following his advice, would find that it is very difficult to put what is here into practice commented. 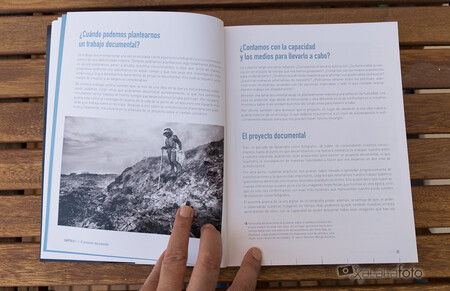 Although it should be more practical, the part dedicated to tips is the most difficult to read.

It is only one impression, perhaps because of a language that is too academic and somewhat distant; or maybe it’s the fault of a complicated syntax, with excessively long sentences (It is noted that, in addition to being a photographer, Javier is a philosopher). Anyway, from chapter four things change a lot and the book becomes a kind of novel, where the author’s style already goes unnoticed and hook for the interest of what counts.

Of course, what counts is quite devastating; that is why it is not a book for “candid souls”, because there are chapters where what is said and what is seen in the photos it’s hard, very hard. A book for mature minds because it tells raw and heartbreaking stories about matters like acid attacks (and how their victims try to lead as normal lives as possible). He also tells us about his “adventures” in the midst of a terrible humanitarian catastrophe such as Typhoon Haiyan in the Philippines, or the ethnic cleansing carried out against the Ronhinyas in Burma. 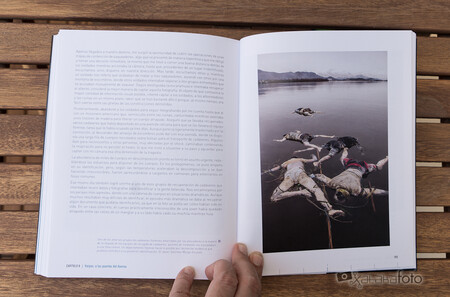 Some of the included photos are devastating, but they are essential to the story.

For all this, if only for this second part, of course the book it’s very worth it (more for an amount of money that today is not going anywhere). And, as we said before, not only to “open the eyes” of a young man who dreams of being a photojournalist, but also for a photographer who has ever thought of the idea and, by extension, to any person aware of issues of solidarity, human rights, humanitarian and environmental catastrophes, etc. 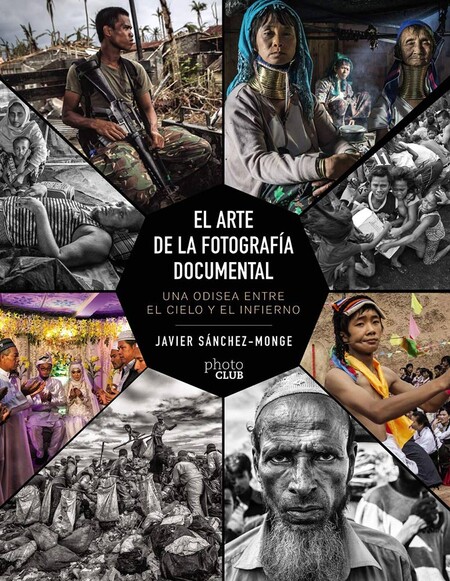 How do I resize an image without losing quality?

Does Brother use pigment ink?

📷 What is photographic overexposure and underexposure? [2021]