Photojournalists fear LaLiga will ban access to football after pandemic

in Photography Ideas
Reading Time: 13 mins read
A A

The Spanish professional soccer league is already warming up, with the soccer teams training in groups of ten people and their sights set on a return to the competition that is getting closer every day. It will be with many security measures and without an audience, but it is not clear yes with photojournalists covering the matches for the different media.

In fact, initially photographers access to training was prohibited and the Professional Soccer League announced that it would be in charge of distributing images among the media that requested it. This caused protests between professionals and groups that denounced a monopoly. de facto, taking advantage of the exceptional situation, which some thought could end up becoming the norm. 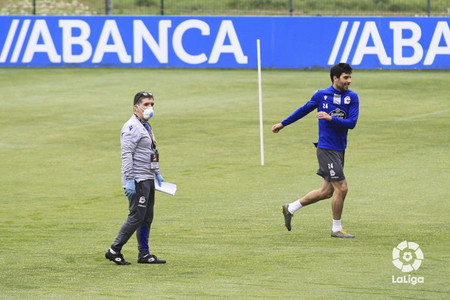 Images of the return to training in the era of COVID-19. Photo for LaLiga

A well-founded suspicion if we remember that, at the beginning of the decade, the radios had to go on strike due to the prohibition of access to the soccer fields if they did not pay a fee. Be that as it may, we will tell you how this new episode has been happening, emphasizing the opinions of some of the professionals who work in this field, and who are obviously the most qualified to talk about what has been happening.

That’s how it all started

It all started in early May, when professional athletes were allowed to return to training. However, one of the regulations that regulated this (Order SND / 399/2020, of May 9) included an article that expressly prohibited that the media attended the training.

The National Association of Graphic Press and Television Informants, along with other associations in the industry throughout Spain, denounced this prohibition, considering that collided with freedom of information and the consideration of members of the media as essential workers. And the FAPE (Federation of Associations of Journalists of Spain) backed them a day later.

But somewhat earlier the Spanish professional soccer league had already released the statement you see below announcing (as we have said before) that would be in charge of distributing the images of training between the media. In other words, taking charge of making the images through their collaborating photographers to distribute them later among the media. 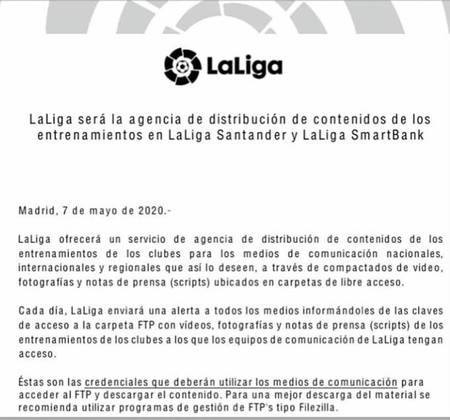 A as can be understood taking into account the current circumstances, and the fact that photojournalists’ access to training had been prohibited. However, as Photolari’s colleagues denounced, this situation meant, on the one hand, ending the “many sports photographers hope to return to work and earn an income”And, on the other, a measure that, taken for justifiable reasons, could suppose that the disease will be used to expand control of the competition organizers “taking advantage […] the weakest link“

Thus The reactions were swift, and there were many professionals in the media (the majority of them freelance photographers who have been seriously affected by the pandemic) who spoke out against the measure. For example, José Luis Pérez, who defined it as “a terrifying precedent“, Or Vannesa Casteleiro who spoke of”charge the sector” 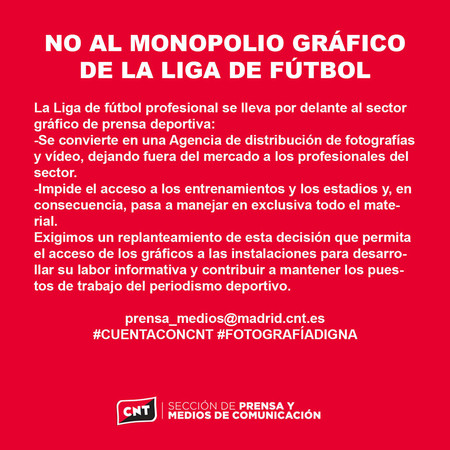 In the process of rectification

Fortunately, it seems that their demands have not fallen on deaf ears, because a few days ago the Spanish Sports Press Association announced that the Higher Sports Council (which is part of the Government of Spain) understands the need for the media can fulfill their informative work when the League resumes.

For this, a meeting with the clubs to develop an action protocol that it include the necessary measures not to deprive the right to information in the resumption of the league competition and “avoid melés the day the media can return to football“

Finally, the AEPD announced that last Saturday a new decree law was approved that relaxes certain restrictions and refers to the resumption of competitions in professional sports. This text specifies that the media may have access to football games for the retransmission of the same.

Of course, the order details that during what they call “Pre-competition total training phase” the presence of the media “will continue to be restricted and it will not be admitted in training areas […] The personnel who are involved in obtaining these audiovisual resources will continue to be subject to the same controls as the rest of the technical and auxiliary personnel.”

Refering to resumption of competition, this will occur “as long as the evolution of the health situation allows it” and it will be “without public and behind closed doors” but “means of communication will be allowed to broadcast the competition“

“The number of people who will be able to access the stadiums and pavilions in which the professional competition takes place, as they are necessary for its proper development, will be determined by the Higher Sports Council prior to the start of the aforementioned competition, following the sanitary recommendations of hygiene and prevention. In the facilities where the competition takes place, the prevention and protection measures established by the health authorities and the Higher Sports Council will be followed in any case.“

Therefore, in principle, the situation should return to relative normality, but obviously the professionals in the sector concerned have a lot to say. We we have spoken with several of them to know their opinion on the situation raised. Including one of them who is a LaLiga collaborator and, therefore, one of those who can attend team training.

Is about Rafa Aparicio, photographer of whom we have already spoken to you on previous occasions and thanks to which we know that safety measures are already widely known (basically a mask, gloves and safety distance) and that have had to undergo a medical check-up.

For Rafa, the measure adopted by LaLiga It is something that does not benefit the profession but is currently necessary: “The remainder of the basketball and Champions League football season will be behind closed doors, both for the public and the media, and I think that, unfortunately knowing how many people in this group work, it is the most successful thing to do wrong, in the end as in everything in life they pay righteous for sinners …”

For his part, Mariano Well he thinks that it’s a disproportionate measure: “It is completely understandable that there is a period in which measures are taken and in which it is stricter, but you also have to understand the other party and how much is at stake for this group.” 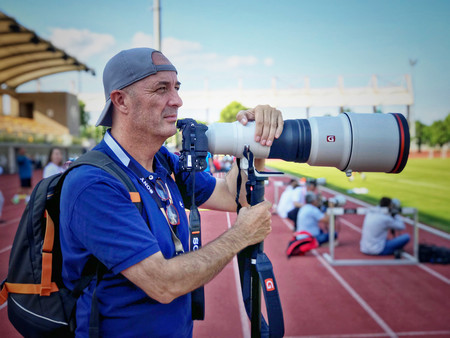 Mariano Pozo on the playing field

This Malaga photojournalist consider there were other options “that can be carried out without nipping in the bud a guild that was already heavily touched before this situation. We are talking about completely empty stadiums and with the option of being able to work from the stands to tens of meters of players and with an enormous distance between one and another photographer.. “

“The fear that we all have is that something temporary becomes permanent and is used to create a monopoly, something that we hope will not happen”

On the possibility that the measure (that LaLiga take the photos through its collaborators and distribute them later) became definitive, Mariano tells us that “That is the fear that we all have, that just as it happens on other occasions, something temporary becomes permanent. There is no doubt that the situation favors them in this sense because it is an indisputable way to remove ourselves from the game board, creating monopoly is something I have heard within the journalistic sector and I hope and wish that they do not fall into that temptation.”

In that same sense it manifests Germán Vidal, sports photographer who tells us how it is something that “English football already adopted a long time ago” So he thinks that this will be a permanent measure: “since this option was being considered for a long time and without a doubt they have taken advantage of this situation to introduce it in a radical way, relying on security, or whatever they want to call it.” And that, he is also of the opinion that “except in important games we have plenty of space talking about football to continue being inside a field“

For his part, Rafa Aparicio He believes that the measure will not be permanent, but he is very sincere when he comments that “If life has taught me anything, it’s not to put my hand on fire for anything or anyone […] As I was saying I think that it is currently necessary and that, for the next season, and if everything goes well, it will return to a relative normality”

“Things get very ugly for a long period of time. Everything will depend and a lot on how all this evolves, so you have to go‘ game by game. “

For him, as for everyone, “it gets really ugly for a long period of time […] this can be extended until the end of the year and it would be more for 2021 when we would return to that controlled normality […] everything will depend a lot on how all this evolves and I think that, as Cholo would say, you have to go ‘game by game’“

In any case, it seems that dialogue between institutions will be important, especially so that a protocol is drawn up that establishes the safety standards to be followed by photographers. In fact, Mariano Well stresses the importance of having “protocols to follow to carry out our work” Furthermore, he believes that it would be essential “watch over a group that may end up seriously affected if the measure is prolonged in time, precisely in moments of massive job destruction”

For him, the collective of photographers already has demonstrated his professionalism in situations of greater exposure in this state of emergency (hospitals, ICUs, morgues …) and “in football it will not be less” “The league -keep going- up to now it has demanded a series of requirements to be able to be accredited and be able to carry out our work, and those of us who are dedicated to this have fulfilled it strictly”

So he advocates don’t take steps back. “Until now —Concludes— this has been a quid pro quo relationship that should not be broken, photographer and professional football are needed, let’s keep walking together“

Food photos: Show your dishes to the world

Tips for taking the best pictures

Does the T5 have WIFI?

Why is Haiti so poor?