How to photograph the Milky Way and marine bioluminescence from a merchant ship, by Santiago Olay

We often remind you that our mailbox is always open to receive suggestions and suggestions, and from time to time we receive some as curious as that of Santiago Olay (alias “Santiago el Marino”), a photography-loving merchant marine who is on board (and without relief in sight due to quarantine), and is dedicated to making pictures of the Milky Way and bioluminescence from the ship to better carry your days.

Santiago works as first officer on a freight ship that is currently at sea. Normally his journey on board lasts about 75 days but “I had to embark this campaign just a couple of days before COVID-19 became so serious in Spain that confinement had to be decreed.” 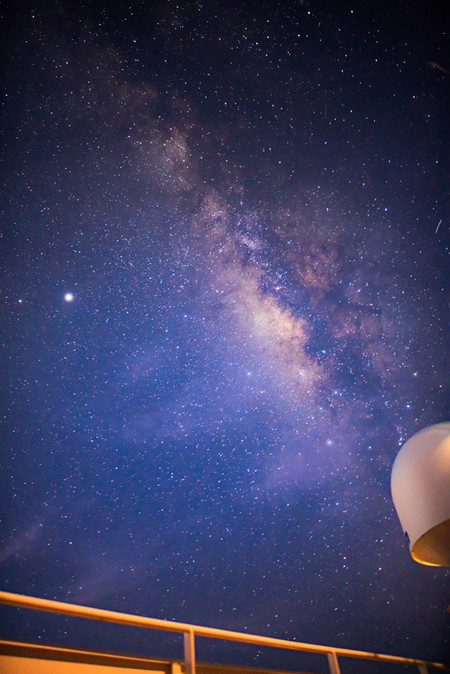 Thus, don’t know when you can disembark although, as he tells us, “The worst thing is not having to do a longer campaign than normal, seeing the one that is falling in the world because we are not going to complain either, we have to shoulder our shoulders and do our part. The really bad thing is knowing that if anything happens to our families at home while we are on the ship right now, we don’t know when we could return to be with ours.“

Of course Santiago it has photography to better carry the days on board. He was always fond of and started taking pictures on boats with a film SLR and digital compacts. But for a couple of years, it made the leap to a DSLR (a Nikon D750) “especially since I was interested in the ability to photograph in very low light conditions” 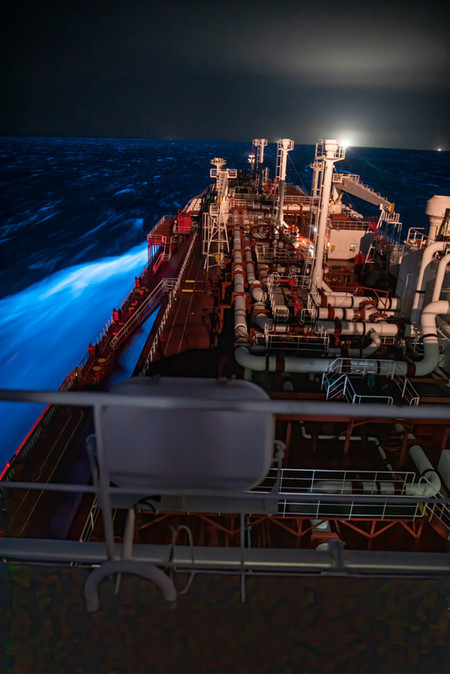 “I started sharing a photo every day on Twitter and WhatsApp to cheer up the family and friends that now had to be locked up at home. As the reaction was positive, I was encouraged to put them on Instagram too”

“I try to capture the things that people like the most, such as the Milky Way or bioluminescence, which can sometimes be a frankly impressive phenomenon […] also give a little insight into the life of seafarers on board, which is something very unknown and surrounded by a lot of legends and stereotypes that are centuries old“ 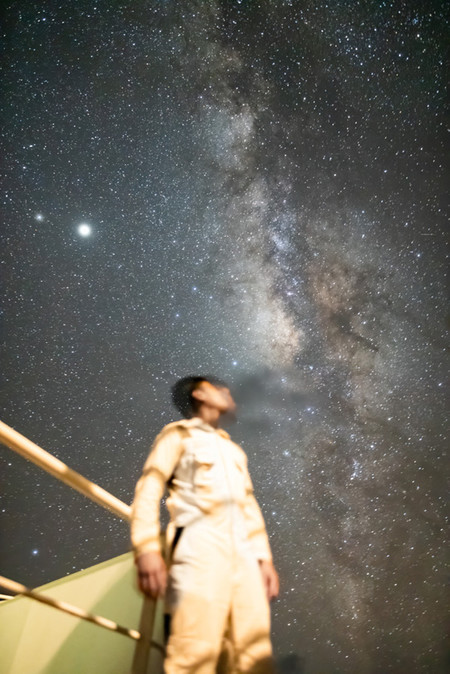 As you can imagine, taking pictures on a boat and in low light is quite a challenge Santiago has overcome by trial and error. “The method I have come to (at least for now) is as follows: I set the camera’s ISO to the native maximum, which in this case is 12,800, I open the diaphragm fully, in my case ƒ1.4 or ƒ 1.8 depending on the lens, and I start with a shutter speed of three seconds”

“With always focus on manual -keep going-, I turn on the rear screen and zoom in on a star to try to focus as best as possible, and once the focus is ready I return to the optical viewfinder. I try to compose as best as possible using the viewfinder or if the camera is in a strange position I take a test photo, review it and move the camera if I am not convinced by the result, until I like it” 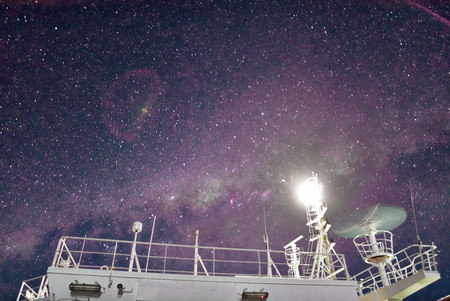 The objectives on board are a Samyang 24mm f1.4 (the one he uses most for night catches), a Tamron SP 35mm f1.8 and a Nikkor AF-D 50mm f1.8. But his idea is “soon add some between 12-15 mm” And to mitigate the movements of the boat as much as possible, use a desktop tripod Cullmann Magnesit Copter “which is the only small one that I have found that holds the camera well”

About him shooting moment tells us that “At first I used to put the intervalometer and leave the camera taking photos, but the vibration was a problem, so now what I do is shoot them by hand while holding the camera and the tripod one with each hand to dampen the vibrations as much as possible“ 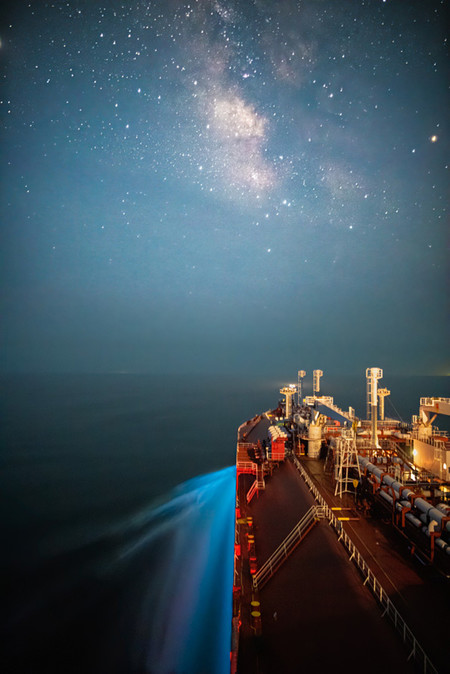 “More complicated -keep going- It is dealing with the pitching movements, balances and yaws of the boat. What I usually do is basically wait for the days when the weather is good, adjust the duration of the exposure depending on what the boat moves and take dozens and dozens of photos”

“Then I pass them to the computer to be able to see them in 100% comfort and I go on sifting little by little until I keep the best of each composition. Sometimes it’s a few, but other times I don’t get any, but I still enjoy the process and it’s as easy as trying again another day“ 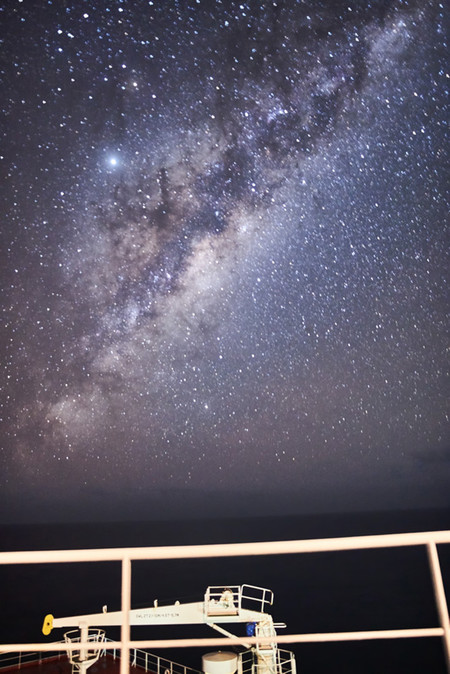 Definitely a complex process in which other factors also come into play: “I have to take into account that the ships I navigate carry dangerous goods, so I have to stay out of dangerous areas, where only intrinsically safe electronic equipment can be used. I carry a portable gas detector anyway just in case”

Thanks to photography, Santiago it takes much better to be away from family, especially in a situation like the current one: “At the end of what I am enjoying the most is the reaction of the people, what they tell me many times as an escape valve of all this, and the same for my part, that at the moment we are literally locked in the boats with no possibility of relays in the near future, while we are expected to continue delivering the goods on time” 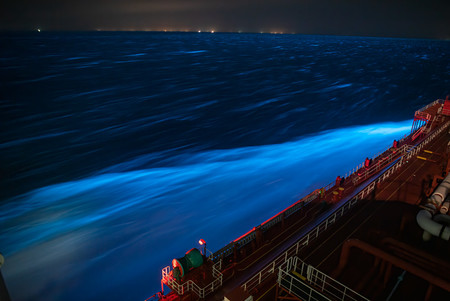 “It also works for me —Concludes— As an incentive to try to bring out a beautiful image every day, and so on the go I learn a little more every day. Also if it is for people to cheer up and take the camera out of the bag and start taking photos and experiment, so much the better!”

We totally agree with Santiago and we thank you very much that you have told us your story and shared your photos. Good luck and cheer up!

How to make a home photo studio for product photography?

home > Blog > Photography > How to make a home photo studio for product photography? How to do a...

‘Pandemic. Looks at a tragedy ‘, 24 photographers come together to raise funds for colleagues who died from COVID-19

"A photograph never reflects the profound horror of a tragedy, but without it we lack the proof to document our...

That NASA itself notices a photo of you and the name "Astronomical photo of the day" is a privilege that...

5 common mistakes of the beginning photographer

The aperture of the diaphragm (or focal aperture)

5 common mistakes of the beginning photographer